Mettle and Pasture - the story of the part played during the Second World War in Europe by the 2nd Battalion The Lincolnshire Regiment. Entering France in September 1939 as part of the British Expeditionary Force (BEF) they witnessed from the front line the blistering attack on Belgium at Louvain and firsthand the German Blitzkrieg beginning on May 10th 1940. Fighting a fierce rearguard action as part of the British 3rd Infantry Division under command of General Montgomery, the Battalion covered the frenzied withdrawal of the British Army through the carnage of Dunkirk, arriving back to the shores of England with less than 25% of their original force. On 6th June 1944, almost four years to the day after the demoralizing evacuation at Dunkirk, the Battalion landed on the coast of Normandy on D-Day.

Told in their own words, eyewitness accounts and memoirs are expertly weaved together with official war diaries to recall the experiences of the infantrymen at the front - from the days in France and Belgium in 1939 to the assault on Normandy, spearheading such a great invasion, to resisting and attacking the enemy at Caen and blunting the formidable Panzer counter attacks in the dangerous Normandy Bocage. From 'out of the frying pan and into the fire', come the bitter battles in Belgium and Holland, the attrition of holding the Maas River during the coldest winter in living memory, and finally on into Germany, fighting the SS around Bremen just hours before hostilities ended on the 8th May 1945. Vivid accounts tell tales of courage and fear, individual sacrifice and how soldiers faced up to the enemy under fire, sharing danger and surviving the savage conditions but also of the pride and honor of belonging to such a famous and historic regiment - The Lincolnshire Regiment. With an abundance of previously unpublished photographs and clear, concise maps of the battlefields, this is the story of the war the way it really was for an infantryman - told by the men who were there. 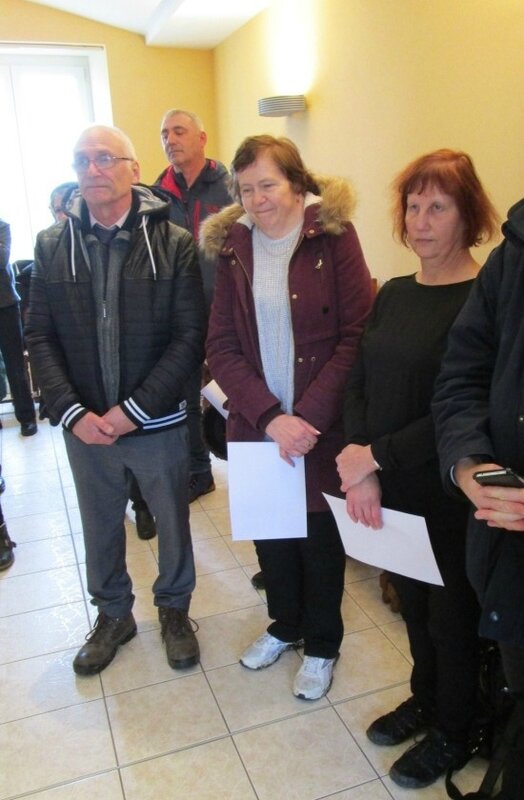 we wish a nice west european historical tour for our British visitors. Athur Papworth and his mother Louise Papworth
20 Council Houses, Ramsey Mereside
(with permission of Peterborough Evening Telegraph).
Corner of a foreign field that is forever Arthur’s 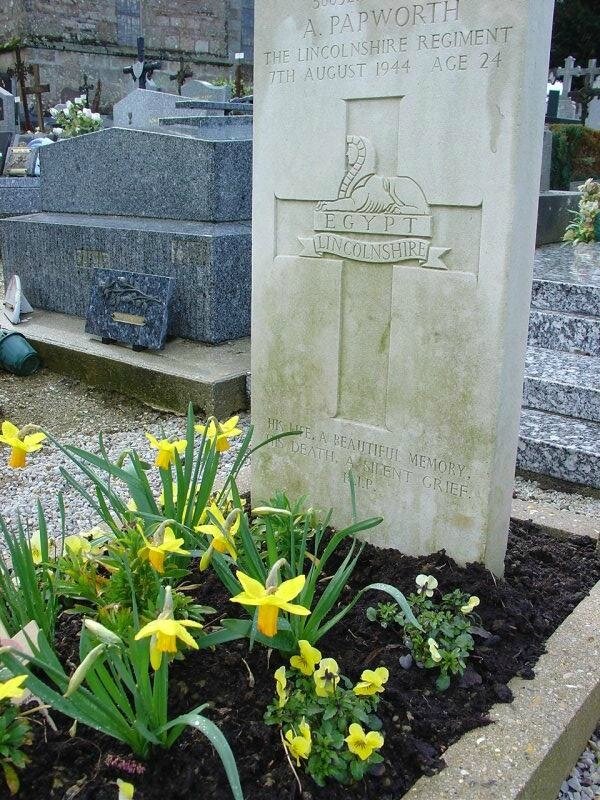 His Life, a Beautiful Memory
His Death, a Silent Grief 2004 - On the Schoolhistory Forum , March 24th, 2004 : « This morning, at my home, there was 2 english couples, coming from the Fens.  One of their uncles, Arthur Papworth, was killed in Vaudry on August 1944 ; he is buried in the village cemetery (no in a war cemetery), and the local authority pays a gardener to flower the tomb. At this moment, it is all in yellow, with daffodils, one of the colours of his regiment. The local school is named after him ». Arthur Papworth will never forgotten in Vaudry, even though few might remember him in his birthplace of Ramsey Mereside. He was one of 51 British soldiers who died there on August 8, 1944 two month after the D-Day in the fight to free a little village in northern France. He was only 24. He hadn’t had time to do much with his short life except give it for freedom, and the French have never forgotten his sacrifice. Neither will future generations, because Vaudry,s new school will be named the Arthur Papworth.

The ceremony will be held at the end of May, and a strong contingent of the Papworth family will be there to pay their own homage.It will include his sister, Mavis Marriott, who lives with her husband Donald in Glebe Road Peterborough, Mavis will speak on behalf of the family. « Arthur’s picture is in the Vaudry town hall, and there is another in the church. His medals we gave them are paraded on the cusion at the annual liberation service », said Mavis.
Why Arthur was selected out of the 51 British soldiers who were killed (14 of them from the Lincolnshire Regiment) is an intriguing story. Exactly how he died is not clear, but Donald hopes to sort that out when they are over there. As far as he and Mavis know, Arthur was bayoneted in hand-to-hand fighting at a spot villagers still identify. « He didn’t die straight away.’’ Said Mavis. « ’A man named Maurice, still alive, looked after him by the roadside. He knew he was going to die, and he asked to be buried in the village cemetery. « They are not sure if Arthur lived for hours or days, but it was long enough to form a bond with the villagers. They remembered his request and buried him in the cemetery ».

The others, and 40 Germans who also died in what was obviously a grim fight, were laid to rest in a military cemetery. « They seem to treat Arthur’s grave as a memorial to all the fallen », said Mavis. Arthur’s brother, George, of Chatteris (he will be at the school naming ceremony) went over there a few years ago with some Fenland soil to put on the grave.The villagers said there was no need – Arthur was already in Little England. And that is 300 miles from Ramsey Mereside, were Arthur was born at 29 Council Houses. It was one of a pair demolished a few years ago. His mother was Louise and his father was Walter, whose service in World War 1 left him with a useless arm.

Five brothers and five sisters made the Papworth family a big one.
The survivors now are George at Chatteris, Ron, Iris and Glenys at Whittlesey, and Walter at Coates. Mavis remembers Arthur as her big brother. She was 13 when he died, 10 years younger than the lad who went to the village school, became a regular soldier and escaped through Dunkirk in 1940.

Mavis well recalls him coming home to recover from his wounds. « We redesigned the front garden for mum. White and pink saxifrages, and long-stemmed violas. He told me to keep them watered or they would die. He didn’t talk about Dunkirk, but when he took his shirt off in the garden I saw the shrapnel wounds on his neck and shoulders ». « When Arthur went back, brother George, also on leave from the army, saw him off from the station. He had the impression that Arthur knew that he wouldn’t survive, and that how it turned out. By that time, he had married a girl from Northampton, but it didn’t work out. A few days after she had written to Arthur’s mother saying she wanted a divorce, the news of his death arrived.That is another day imprinted on Mavis. She said : « We were working in an onion field when my sister went home on her bike. She came back with the telegram ».’

At school I said it must be a mistake. Looked at the garden and thought that if he was dead, he’d never see what I’d done.« All that was 50 years ago.Arthur’s death brought him greater recognition than anybody else in the family achieved, even though it is in France. Mavis is left with if and buts which can never be answered ». What would father have thought, for instance, if they’d said to him « ’Look here, dad, they’re naming a school after Arthur ».