Westward the Women is a 1951 western film directed by William A. Wellman and starring Robert Taylor, Denise Darcel and John McIntire
http://en.wikipedia.org/wiki/Westward_the_Women

« In 1851, Roy Whitman (John McIntire) decides to bring 140 marriageable women west to California to join the lonely men of Whitman's Valley, hoping the couples will put down roots and settle there. Buck Wyatt (Robert Taylor) leads the wagon train along the California Trail from Saint-Louis and Independence.

The women perform heroically, persevering through hardships including a stampede and a wicked descent down a steep, rocky trail that kills one of them when an iron hook attached to the restraining lines straightens under load and sends the wagon plunging out of control. An Indian attack kills Roy, Sid, and six of the women. When a rainstorm causes flooding and undercuts the riverbank her wagon is parked on, Laurie is trapped inside and drowns. However, Fifi's bravery and determination begin to thaw Buck's attitude towards women in general and her in particular, and they fall in love.» 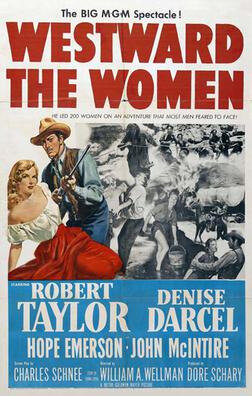